1. Head to Hurricane Ridge for the Best View On the Olympic Peninsula

Head to the gateway of the Olympic National Park in Port Angeles, Washington for superhero views of the Olympic mountains. Drive up a windy road to the tippy top where you can grab a bite from the lodge. Watch the wildlife graze as you gaze at majestic mountains and the Strait of Juan de Fuca.

For wintertime fun, the Olympic National Park is one of only three national parks in the United States that have a ski lift. The ski lift is open mainly on weekends during the winter months. A sledding hill, cross country skiing, and snowshoe trails are also accessible from the lodge for winter fun. If you don’t feel like driving on icy, snowy roads consider reserving a ride on the Hurricane Ridge Winter Shuttle which runs from early January through late March. 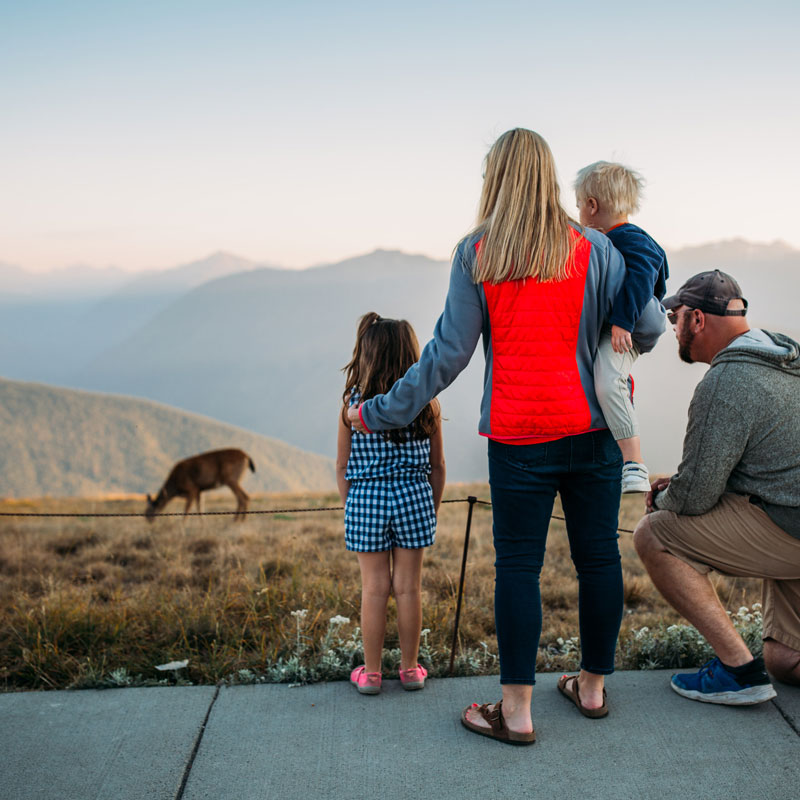 2. Hiking – From High Elevations to the Hoh Rainforest, Here are a Few Must-Do Hikes

Eight hiking trails fan out from the Hurricane Ridge Lodge and parking lot in the Olympic National Park. From easy paved trails (wheelchair accessible) to day-long hikes, you’ll find your sunset, sunrise or mid-day moment of awe. The wildlife viewing opportunities are incredible along the Klahhane Ridge trail. There are over 600 miles of hiking trails within the national park to explore. Backpack or day hike along Pacific Ocean beaches, too. Here are a few of our favorite hikes, but there are plenty more. 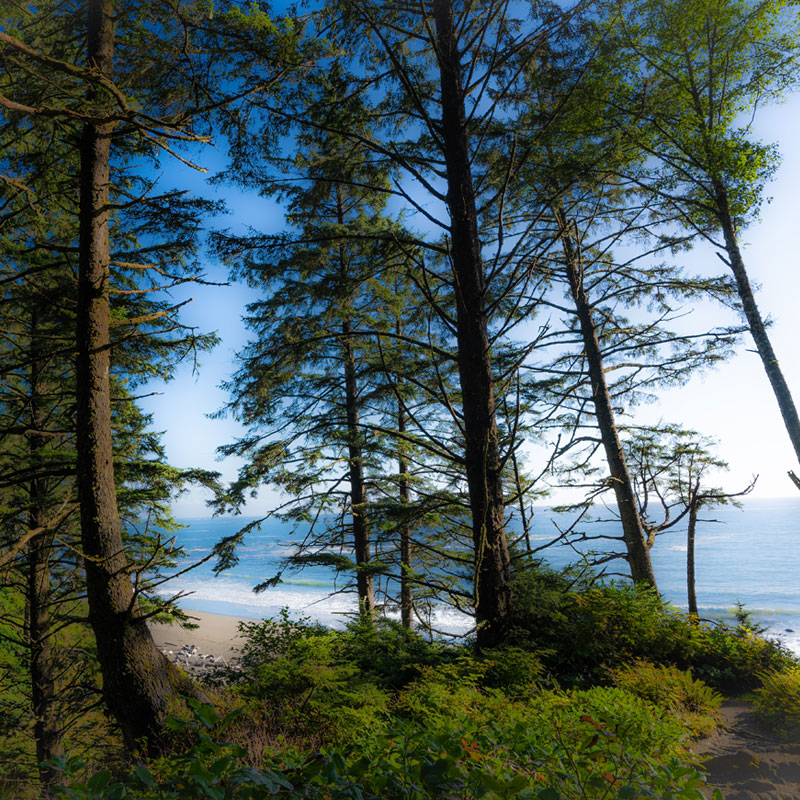 Tidepooling spots, scenic beach outlooks and sandy shores are prevalent around Port Angeles. Head to Salt Creek Recreation Area for a number of trails to tidepools and even old World War II bunkers. Freshwater Bay offers a serene spot to seek out crustaceans and more marine life or even launch a kayak. Hike to the Hole-in-the-Wall at Rialto Beach in the Olympic National Park for more tide pooling fun and the incredible Pacific Ocean scenery. 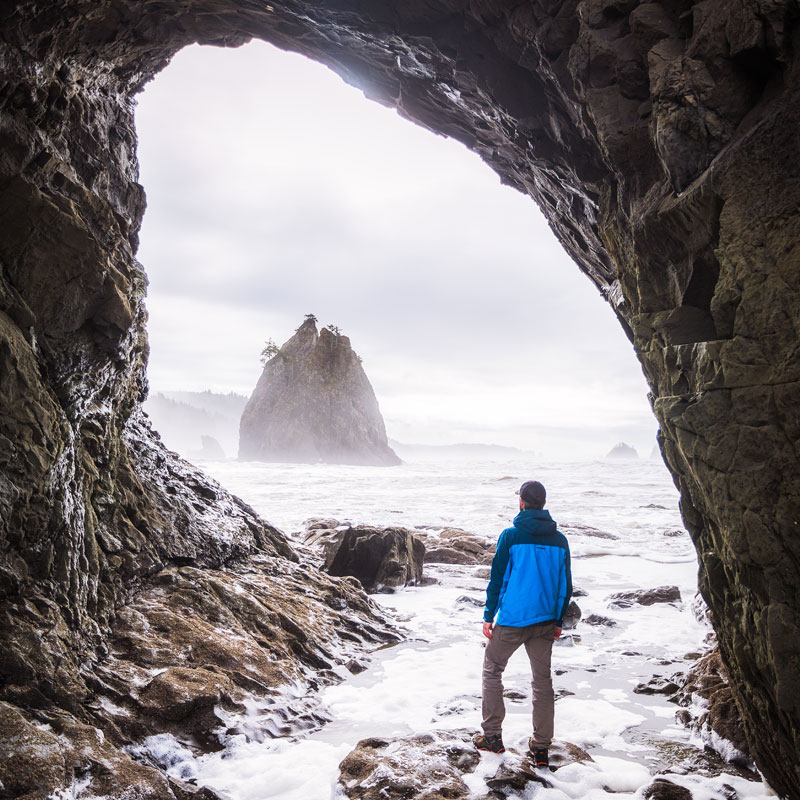 4. Whale Watching & Marine Life Preserve – Whale watch by boat or on foot (really!) along the Whale Trail in Port Angeles — one of the West Coast’s best whale watching spots

The waters surrounding Port Angeles — only a short ride or drive from Seattle and the Sea-Tac Airport — offer one of North America’s finest vantage points for up-close viewing of humpback whales, gray whales, resident and transient orca whales (a.k.a. killer whales), and the elusive minke whale. Prime whale watching season on the Olympic Peninsula runs from May through October.

Daily whale watching tours leave from the Port Angeles harbor in downtown with Puget Sound Express, where photo-of-a-lifetime opportunities happen at every turn. An experienced naturalist will help you identify the array of whales, elephant seals, sea otters, and birds that the waters off Port Angeles hold. 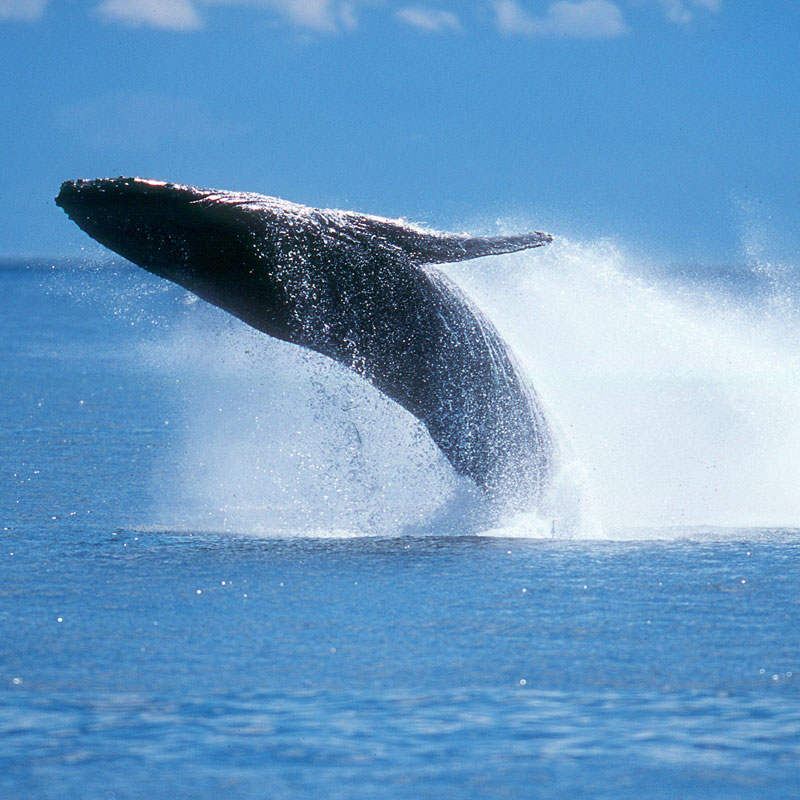 5. A Cool Town – Named #2 Best Town by Outside Magazine

As the gateway to the Olympic National Park, Port Angeles is a smallish seaside-meets-mountain town. Stroll through downtown Port Angeles shopping for souvenirs, a new outfit from a hip boutique, then grab a coffee and settle in with a good book from one of two indie book stores in town. Reserve a guided underground historical tour to hear the secrets of Port Angeles’ past. Visit the Feiro Marine Life Center along the downtown waterfront to gaze at a giant Pacific octopus, hang at Hollywood Beach, or head to the historic Carnegie Museum to gaze at two-thousand-year-old artifacts from the ancient village, c’ix’íc’n, found near Ediz Hook. 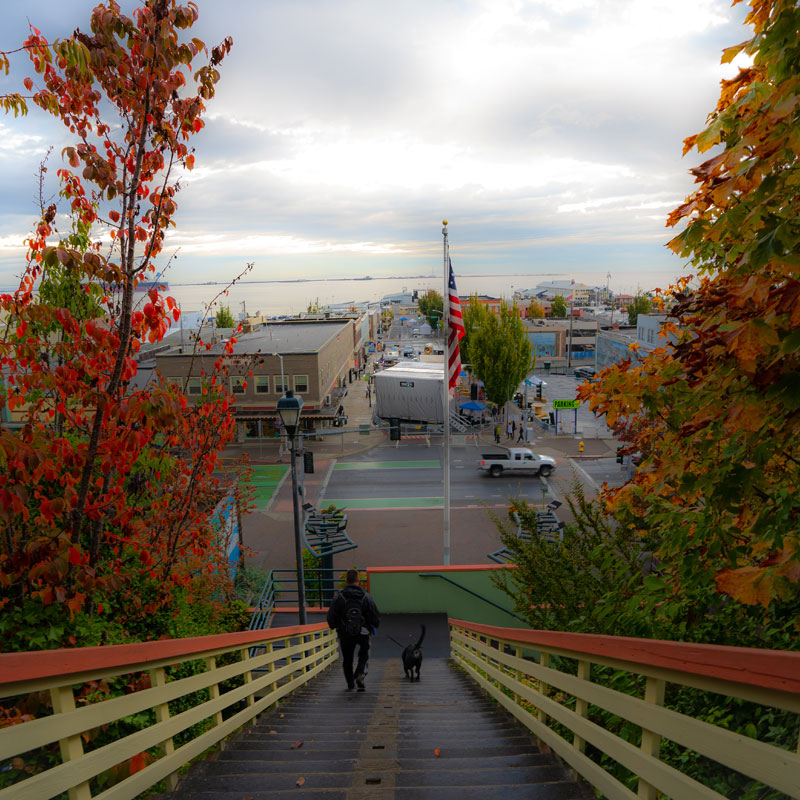 The Olympic Discovery Trail, a mostly paved path for biking, walking and running, extends from Port Townsend to Port Angeles and on to Forks. Cruise by coastlines, rivers, streams, sapphire lakes and backwoods beaches. From downtown Port Angeles pedal out to Ediz Hook for sea, city, and Olympic mountain vistas. Cruise the 70+ miles of paved trail, or take the “adventure route” up the hill from downtown Port Angeles for an off-road ride to the Elwha River and Lake Crescent on 26-miles of sinewy single and double-track trails. A somewhat secret, Port Angeles’ extensive and diverse trail system and mild climate is made for mountain bikers of all abilities. Don’t miss the annual NW Cup downhill MTB race, or the Ride the Hurricane road cycling event for a stunning car-free ride through the Olympic National Park.

7. Make It a Two-Nation Vacation – Day Trip or Spend a Couple Days in Canada’s Most Charming City, Victoria B.C.

Victoria, British Columbia, Canada is a short ferry ride from downtown Port Angeles. Hop aboard the Coho Ferry — with or without a car — for a scenic voyage across the Strait of Juan de Fuca (watch for whales!). Once you’ve arrived take in the sights like Craigdarrach Castle, Chinatown, Butchart Gardens, or the Fairmont Empress Hotel for a British-style high tea. Pedal the afternoon away on an electric bike through the city side or pedal from pub to pub on a bike made for 15. 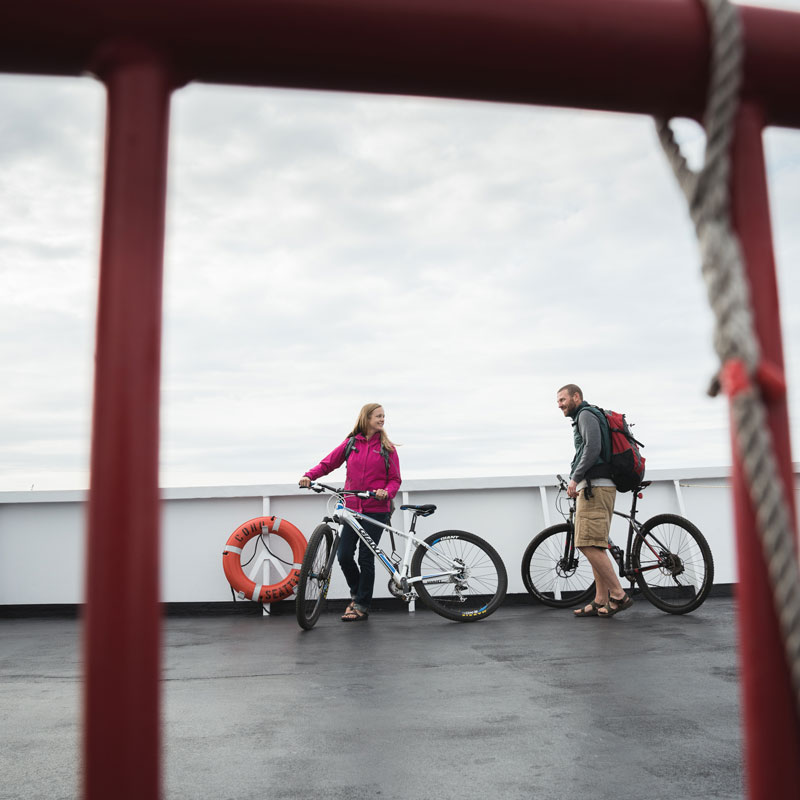 8. Culinary Adventures – Eat & Drink at the Best Restaurants on the Olympic Peninsula

Port Angeles’ dining scene is on par with Portland and Seattle’s epicurean culture but on a micro-scale. Port Angeles has some of the Olympic Peninsula’s best eats and drinks. Pick up some in-season snacks from local farms to fuel your day from the year-round farmers market every Saturday. Sip wine at a laid-back nano-winery where the grapes are hand-picked and crushed within hours of harvest. Feast on homemade Italian and fresh seafood. Grab gourmet burgers and craft beer for a casual dinner out. 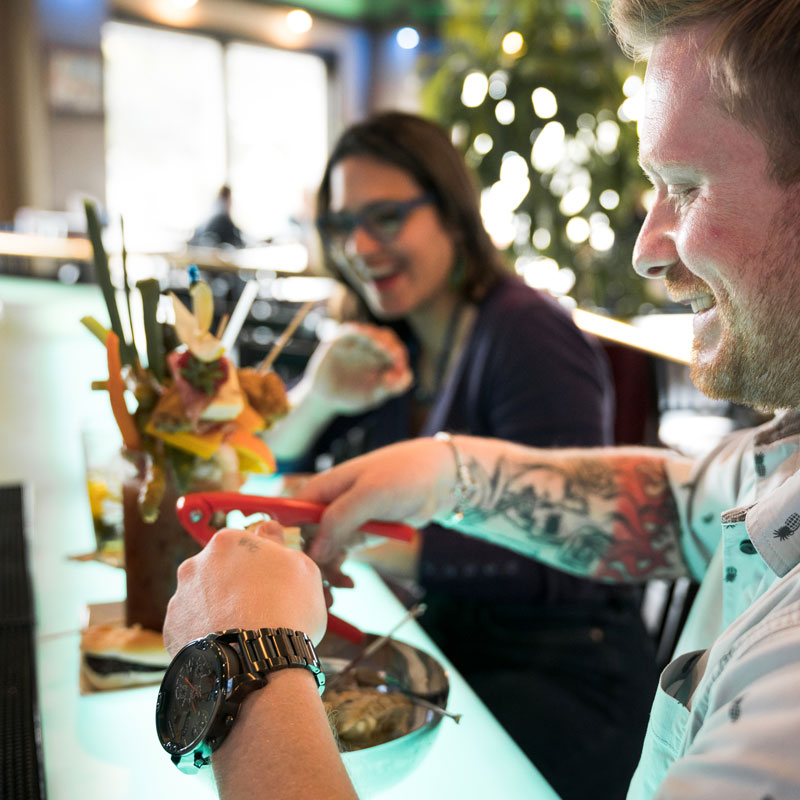 9. Art This Way – Follow a Mural Trail, Walk Through a Wooded Art Park or Sightsee for Sculptures 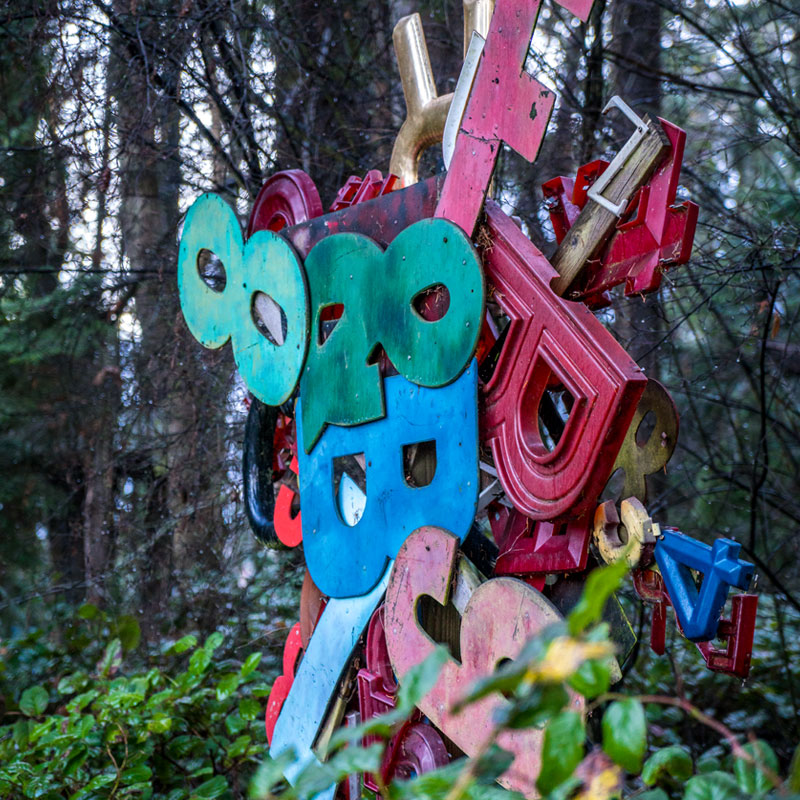 10. Events – From Mile-high Cycling Events to Trail Runs Along Crystal Clear Lakes, Here are a Few Annual Events to Catch

Make a date to visit us in Port Angeles for one of our lively annual events with a little bit of something for everyone. From foodie and beer fests to trail runs and bike races, you’ll find a festive good time for the entire family or just the two of you. 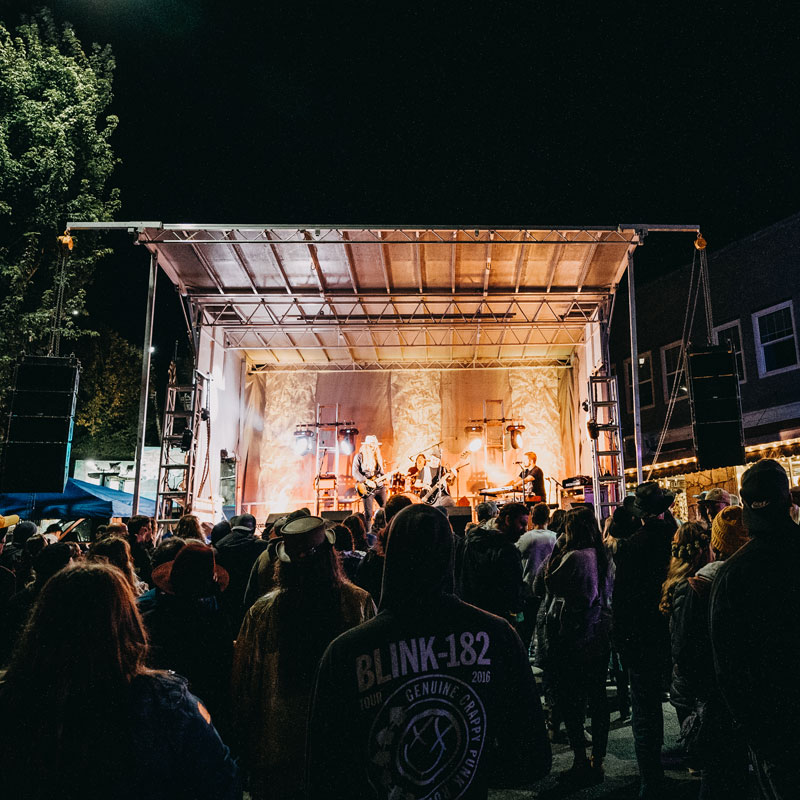 11. Cool History – From Native American Tribal Culture to a Historic Seaport with an Underground City

The entire Olympic Peninsula is rich in Native American history and culture. In fact, even our street signs in downtown are in both English and Klallam to honor the Klallam tribes. There are eight local tribes residing on reservations along the Olympic Peninsula’s coastal areas who ceded their land back in 1855 and 1856. Today, ancestors of the original people remain and work in conjunction with the Olympic National Park and cities within the Peninsula to honor their access to the National Park and other natural areas for traditional land use and spiritual beliefs and practices.

The Elwha Klallam Heritage Center opened the historic Carnegie Museum in downtown Port Angeles to house its Native American art exhibits. The famous tribal exhibits on display include Tse-whit-zen Village (c’ix’íc’n) where two-thousand-year-old artifacts were recovered from the ancient village site near Ediz Hook in Port Angeles. This is the largest excavation in Washington State. The epic Elwha River dam removal project is also documented in an exhibit curated by the Burke Museum of Seattle. The House of Learning Longhouse (aʔk̓ʷustəƞáwt̓xʷ ) is the first of its kind in the nation to be constructed on a college campus through collaboration with six local tribes. Wander in to view the impressive collection of rotating Native American art from area tribes. If you happen to be visiting Port Angeles in late July through early August, try to catch the annual Tribal Canoe Journeys, a spiritual canoe voyage where paddlers heading to Canada land at Port Angeles’ Hollywood Beach. The public is welcome to spectate and even participate.

There are a number of historic buildings throughout downtown Port Angeles. We highly recommend taking the Underground Heritage Tour, a city walking tour of Port Angeles’ underground network of tunnels and storefronts from the early 1900s. Another highlight is the restored Carnegie Library building just up the hill from downtown. The Clallam County Historical Society restored the original 1919 library into the Museum at Carnegie. Take a self-guided art mural tour that tells the story of Port Angeles’ maritime heritage and Native American culture. Don’t miss the annual Port Angeles Maritime Festival happening every June. 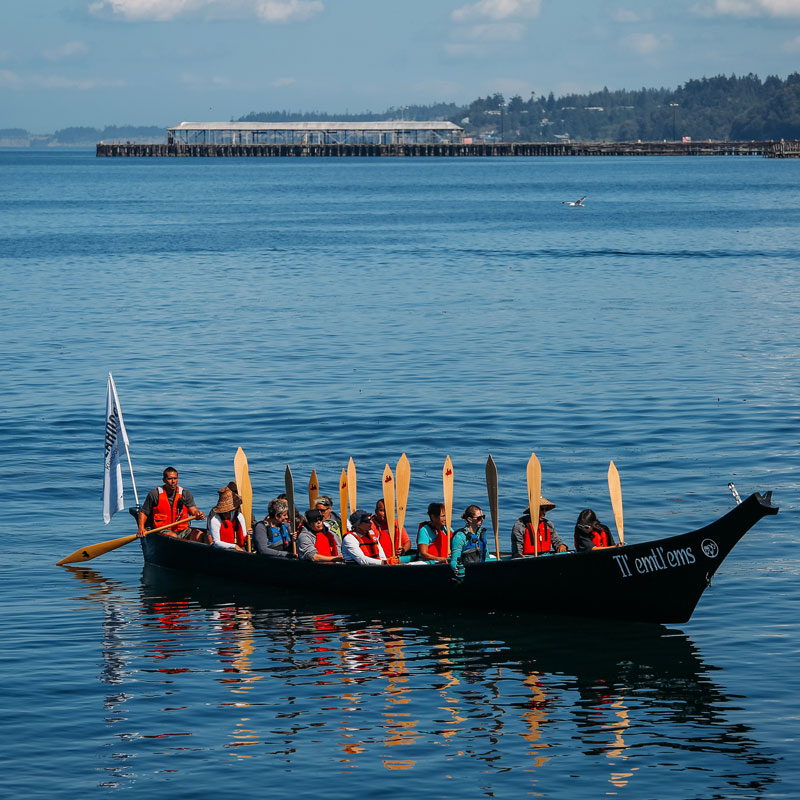 How to Get Here

FLY: Touch down at SEA-TAC Airport — the closest International Airport to Port Angeles and the Olympic National Park. Rent a car from the airport and enjoy the short scenic drive up to the Olympic Peninsula.

You can sync up with the Strait Shot Bus from Seattle-Tacoma International Airport (SEA) for a car-free way to explore. Clallam Transit’s Strait Shot bus offers daily service to and from Port Angeles. Once you arrive, you can continue to get around via our Peninsula-wide transit system or rent a car in downtown to explore more.

DRIVE: Driving is the quickest way to get to Port Angeles from the Seattle area. Getting to Port Angeles, the Olympic National Park and Olympic Peninsula on Hwy 101 is a pleasant drive with most of the trip following Washington’s Puget Sound.

> Learn more about getting here

Fly Into the Seattle-Tacoma International (SEA) Airport to get to Port Angeles. Thirty-one airlines serve 91 non-stop domestic and 28 international destinations including Canada, Mexico, and seasonal operations.

KEEP UP WITH US

Get the latest and greatest stories & things to do delivered to your inbox.