331 Things to Do in Port Angeles, Washington – #69 Follow a Mural Trail

Follow a mural trail in Port Angeles, Washington on foot or by bike! Twelve outdoor art murals dot the downtown Port Angeles area and tell a tale of the town’s rich maritime history and Native American culture. This self-guided art mural tour will take you to both hidden and not-so-hidden works of art.

And there’s a good chance you might discover more … Port Angeles is known for works of spectacular art and sculptures hiding out-of-sight (underground, under bushes, lonely back alleys, etc.) so snap a photo, tag us and use the hashtag #331ThingstoDo if you find something fun to share. Book a guided Port Angeles Underground Tour to see some of our subterranean murals!

You can continue your outdoor art trek to Webster’s Woods Sculpture Park at the Port Angeles Fine Arts Center.

We’d like to give an official “appreciation” shout out to the artists, the Nor’wester Rotary Club of Port Angeles, business owners, building owners and the community who make these murals possible and for giving them the continued TLC they need to in order to preserve them for future generations. You can help fund current and future mural restoration projects by contacting the Nor’wester Rotary Club of Port Angeles.

At 94 feet long and 20 feet high, this mural depicts the process of how the streets were raised over 100 years ago to fix the flooding issues. The project was completed on June 22, 1914. The original storefronts of yesteryear are now basements today and part of Port Angeles’ subterranean underground tour. Local artists Hank Krueger and Tim Quinn (both now deceased) began work on “Sluicing” in 1996 and completed the mural in 1997. This mural received a facelift in the summer of 2019 by Cory Ench thanks to the Nor’wester Rotary Club of Port Angeles for the funding and fundraising efforts along with a grant from the City of Port Angeles. 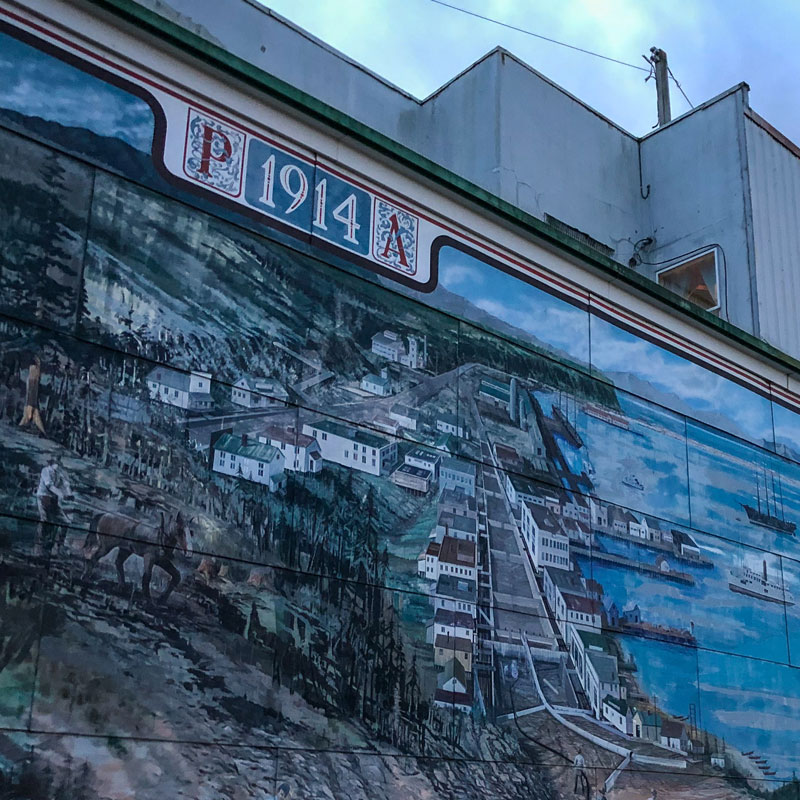 This is likely the most photographed mural in Port Angeles with its amusing three-dimensional-like people and dog. Painted in 1995-1996 by Cory Ench, the MV Kalakala was a one-of-a-kind ferry boat designed by Boeing in the 1930s that used to be docked in Seattle and was a primary attraction before the famous Space Needle was erected. The art-deco ferry ran between Port Angeles and Victoria B.C. Canada for many years.

Location: On the back (south-facing) wall of the former Bank of America building, 102 E. Front St. (at Laurel Street) 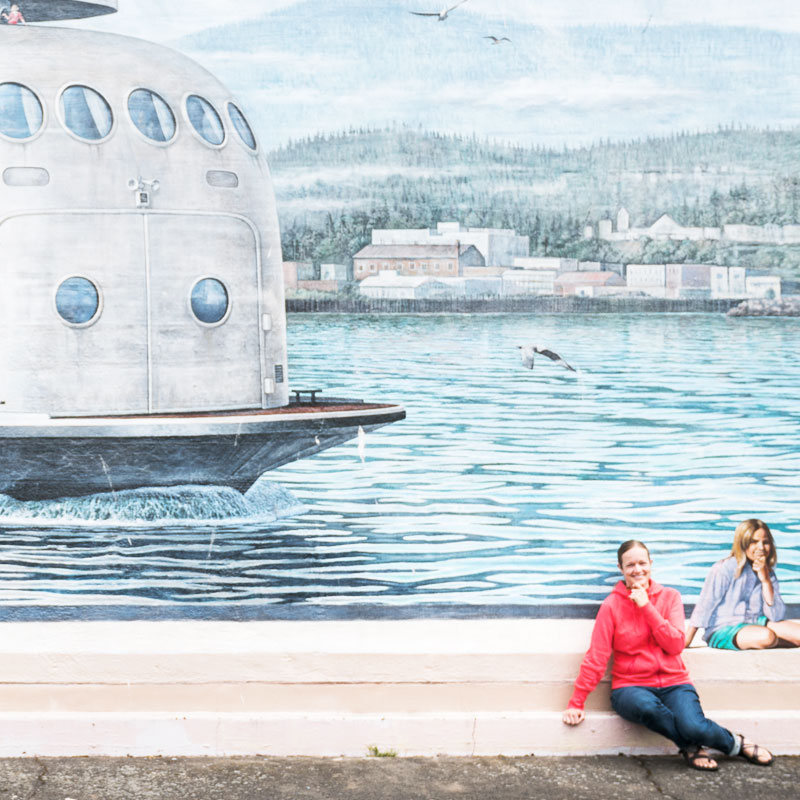 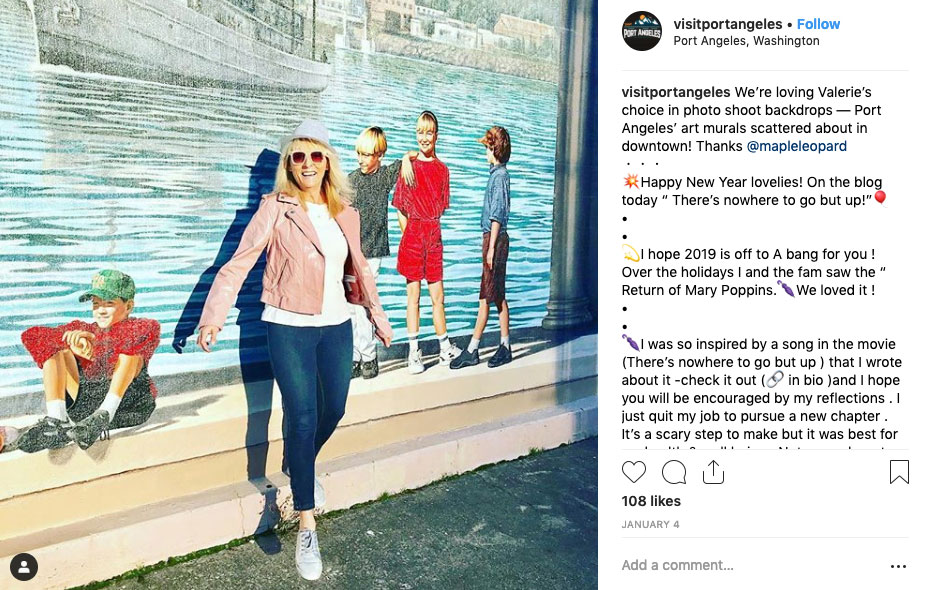 This mural artfully illustrates and recreates the early days of the Port Angeles waterfront in 1750 (Klallam tribal village) and 1889 (Puget Sound Cooperative Colony). The artist is Cory Ench, an internationally known artist who now lives in nearby Joyce, has painted posters for major festivals like Burning Man and public murals for the National Park Service. Ench also painted the MV Kalakala and Ennis Creek murals (#2 and #3). 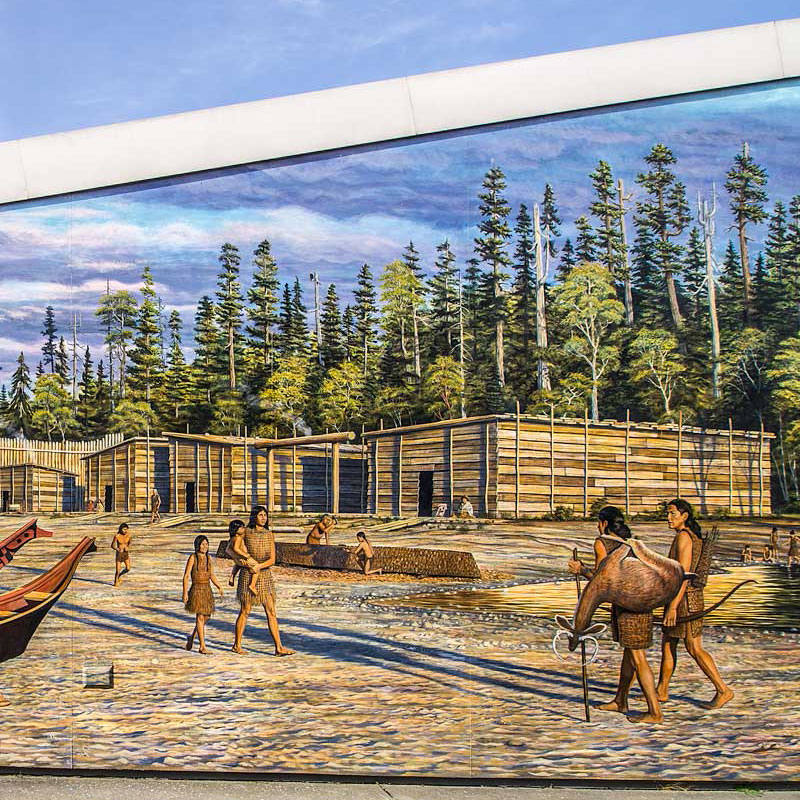 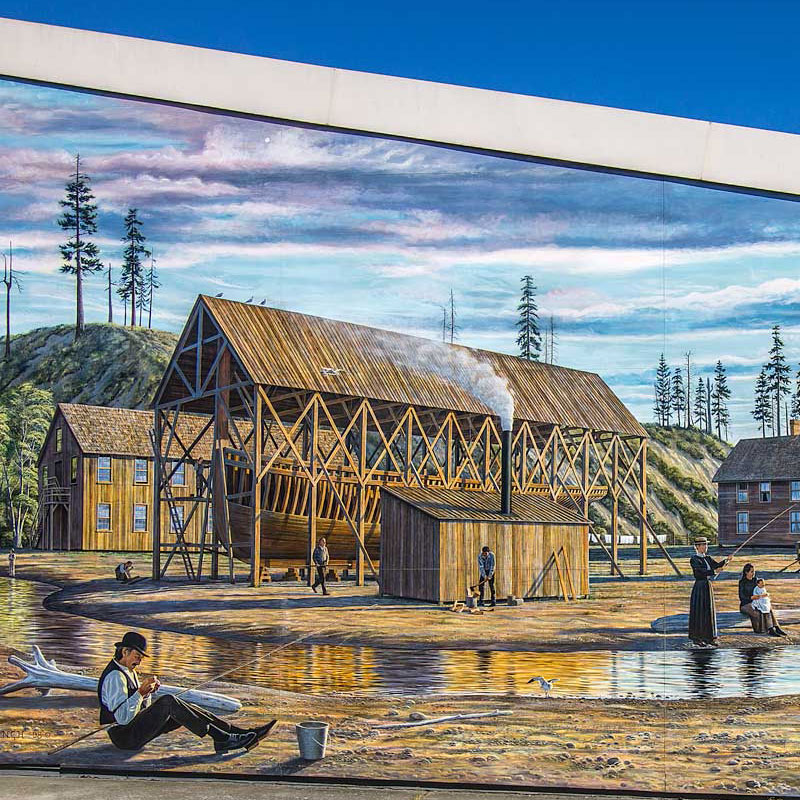 Just try and guess how many animals and insects are hidden throughout this art mural. This mural depicts Port Angeles as the gateway to the Olympic National Park and celebrates the park’s remarkable “mountains to the sea” ecosystems. The mural pays homage to the two former presidents responsible for creating Olympic National Park. The faces of Franklin Roosevelt and Theodore Roosevelt appear in the clouds, looking down upon the mountains they helped protect. The colorful mural sits in the center of downtown and is punctuated by the Conrad Dyar Memorial Fountain that flows during the warmer months. Olympic Visions was created by artist Tim Quinn in 1999. It was repainted in 2010 by Jackson Smart and Dani LaBlond. Take the steps up from the mural to capture an impressive view of the Port Angeles harbor and our neighbors to the north in Victoria, B.C. Canada.

Location: Behind the Dyar fountain on the south side of the intersection of First and Laurel streets 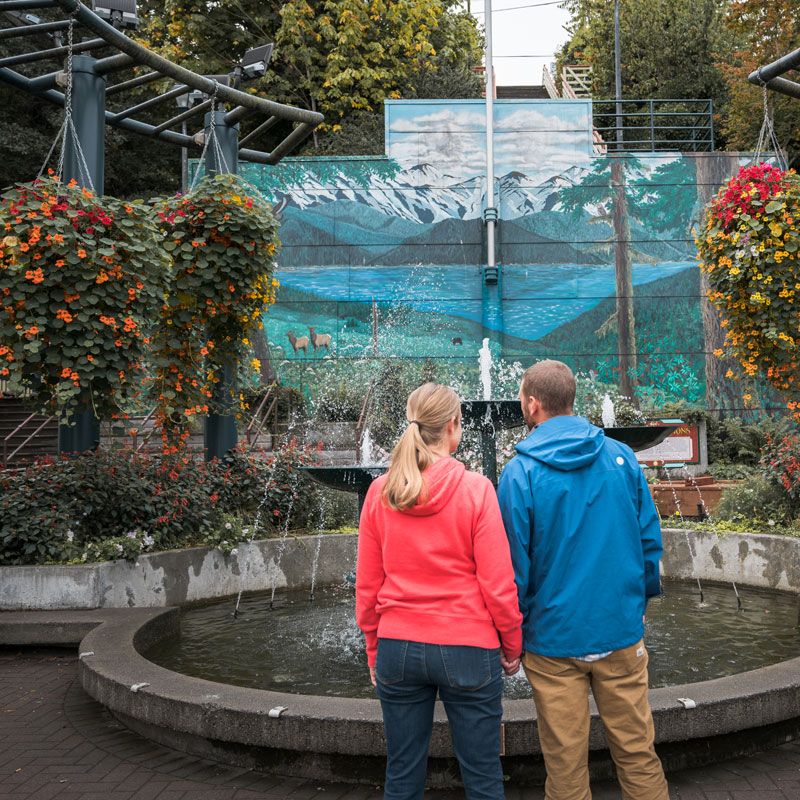 This 60-foot-long mural painting pays tribute to Port Angeles’ maritime history and the U.S. Navy’s Pacific Fleet which anchored in Port Angeles Harbor for extended stays from 1895 to 1935. Notable battleships, frigates and aircraft carriers include the USS Saratoga, USS Arizona, USS Missouri, and the USS Constitution.  Two artists — Jackson Smart (who worked on four other murals in Port Angeles and a series of interpretative signs) and Bob Stokes (Stokes is an accomplished artist with a gallery and working studio downtown at 118 E. Front St.) — created the mural in 2018 with funding and support by the Capos’ family. The Capos brothers are depicted in the mural. Pete and Angelo were in the Navy, Jerry was a Bremerton shipyards supervisor and Nick was an Army doctor. Tina Capos (sister) supplied the photographs of her brothers for the mural.

Read more about this mural here. 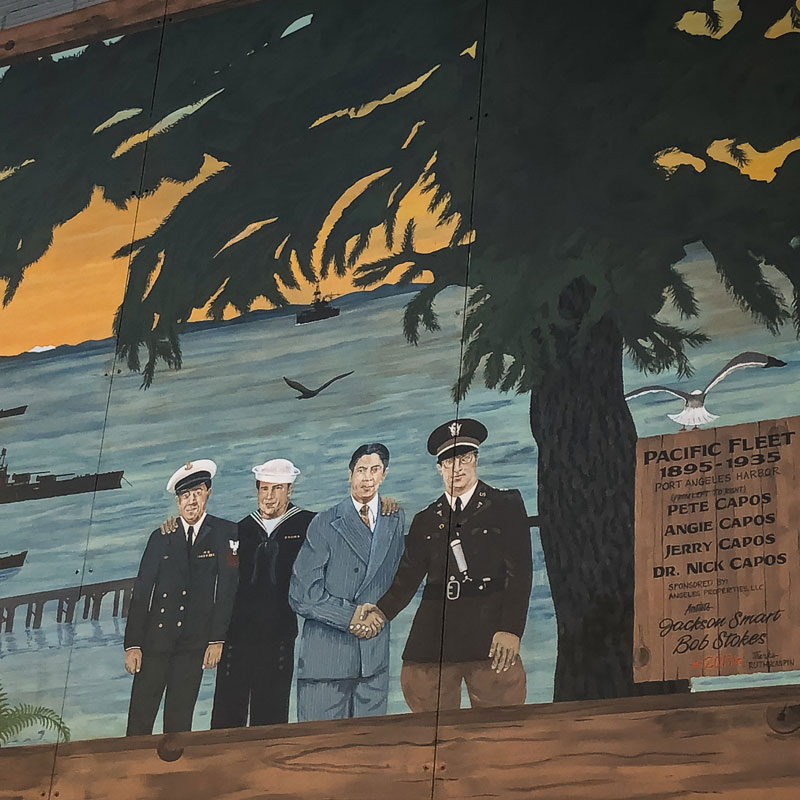 This vintage advertisement for Red Goose Shoes was discovered underneath layers and layers of peeling paint. The owner of the Family Shoe Store, Kevin Thompson, hired Jackson Smart to restore the shoe advertising on the front of the building and repaint the large Red Goose Shoes logo on the east side of the building. The locally-owned shoe store is located in one of the oldest buildings in Port Angeles dating back to 1913 and is operated by one family for over four generations. This family believes in preserving Port Angeles’ history. It’s worth a visit to not only buy some of the latest hiking or athletic shoes, but to also check out the antique foot x-ray contraption and the hand-carved animated wooden animals in the kids’ shoe section.

Fun fact: This building has been proven to be haunted by paranormal investigators and is a stop on the famous Port Angeles Underground Heritage Tour (find out what’s in the attic!). 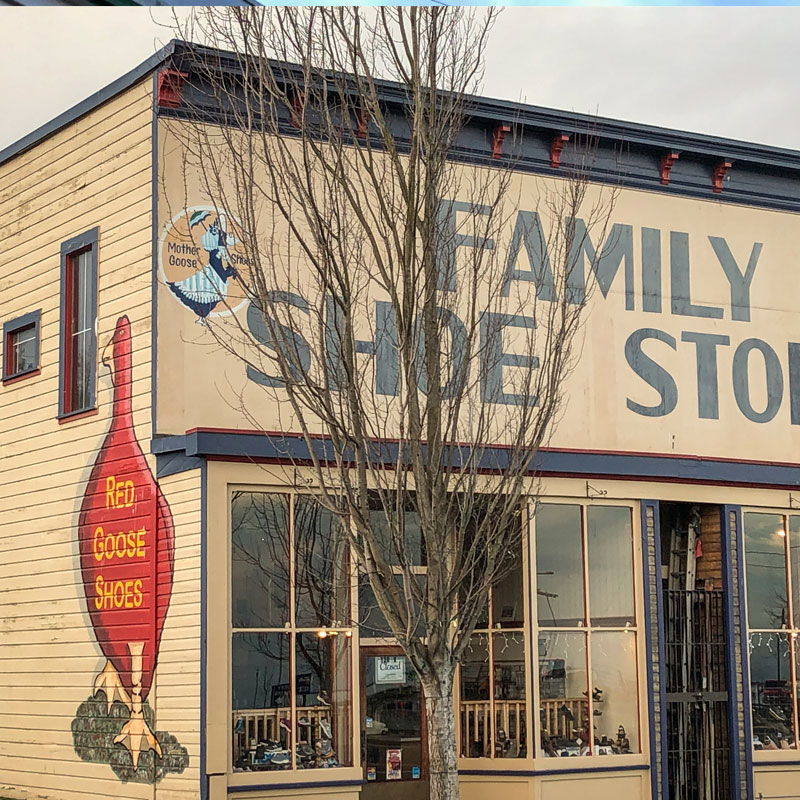 Painted by Jackson Smart in 2009 on the north wall of the Black Ball Ferry Building, it greets travelers arriving in Port Angeles from Victoria, B.C., Canada on the MV Coho ferry. The 10-foot-by-20-foot mural depicts the first European ship — the San Carlos from Spain — in Port Angeles Harbor in 1791. It is shown being greeted by members of the Klallam tribe in their canoes. Smart also created a series of interpretive signs mounted on pedestals along the Port Angeles waterfront and also made a welcome sign in 2004 for the eastern entrance to Port Angeles on U.S. Highway 101 as part of a Port Angeles Rotary Club project. 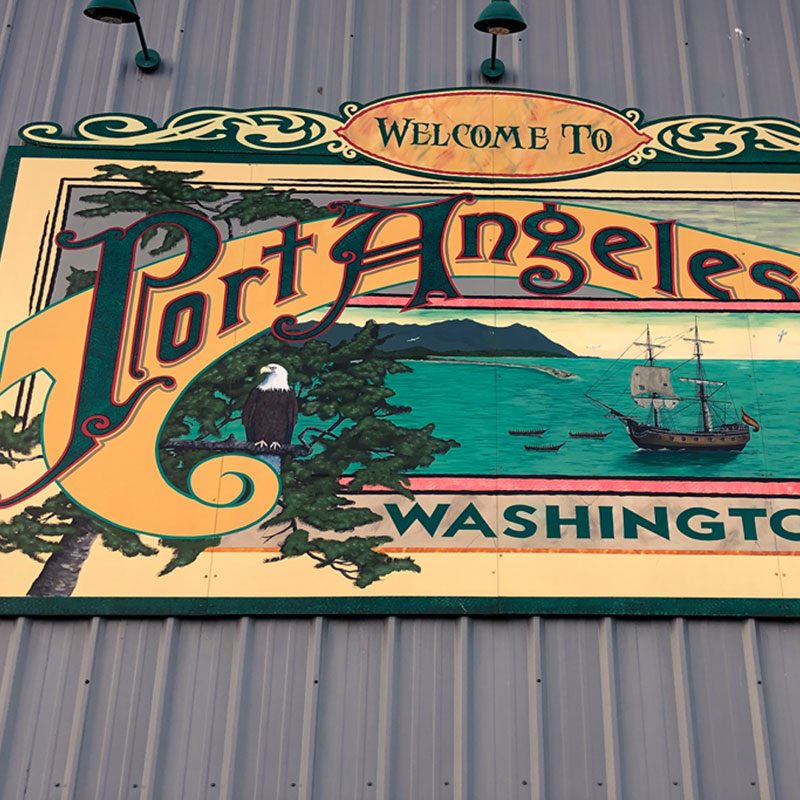 This was the first mural in Port Angeles, painted by Jackson Smart, Hank Krueger and Tim Quinn in 1993. It depicts The Norman, the first locomotive and tender to arrive in Port Angeles and named after Norman R. Smith, a businessman and son of an early Port Angeles pioneer. For many years Smith tried to promote and develop a railroad line to Port Angeles. The Norman was transported on a barge from Seattle and off-loaded in 1903 at the dock used today by Black Ball Ferry Line’s MV Coho. The Port Angeles & Pacific Railroad got a right of way through town and cut ties and laid track. Smith put bleachers on a flatcar and took some 50 friends on a triumphant ride. Then Port Angeles & Pacific went broke, and The Norman never saw commercial service. It was scraped to aid the U.S. war effort during World War I.

Suffering from years of Northwest weather, discussions are underway about restoring this mural.

Location: East wall of Barhop Brewing and Artisan Pizza, 124 W. Railroad Ave. (Railroad Avenue runs along what was a timber-hauling rail line between Port Angeles and Port Townsend. After many ownership changes, rail service stopped in March 1985, and the rails, ties and equipment were removed in 1987. Today significant sections of the abandoned railway have been dedicated as a rails-to-trails route known as the Olympic Discovery Trail.) 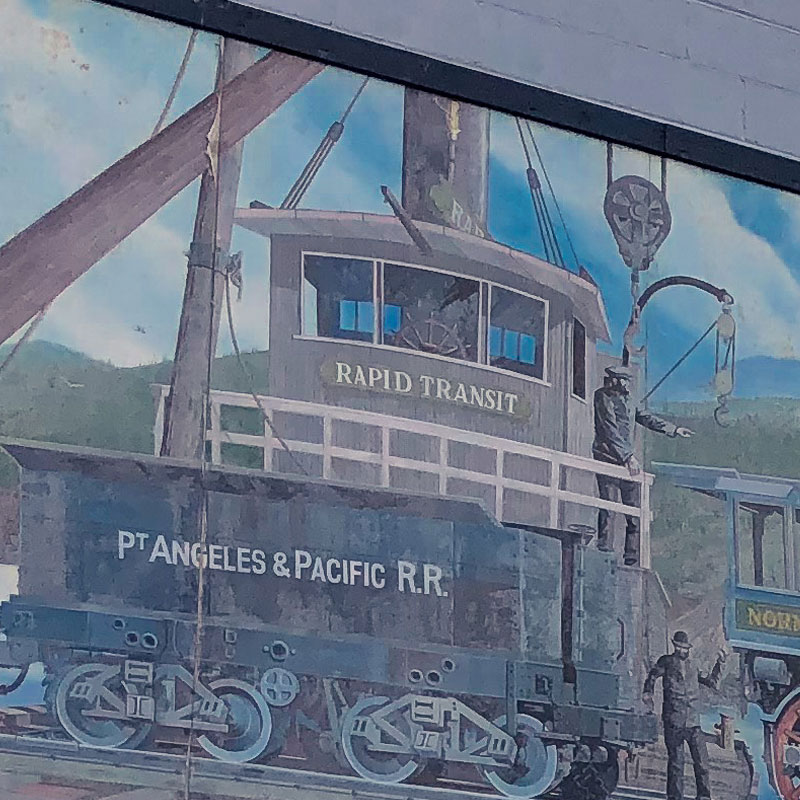 Located on the south wall of Angeles Machine Works Inc. at Second and Peabody streets, a few blocks east of the downtown area, this mural shows a Port Angeles logging operation at the turn of the century, with a steam-powered traction engine and a steam donkey yarder (a winch). This mural was done by Howard Chadwick in 1997. 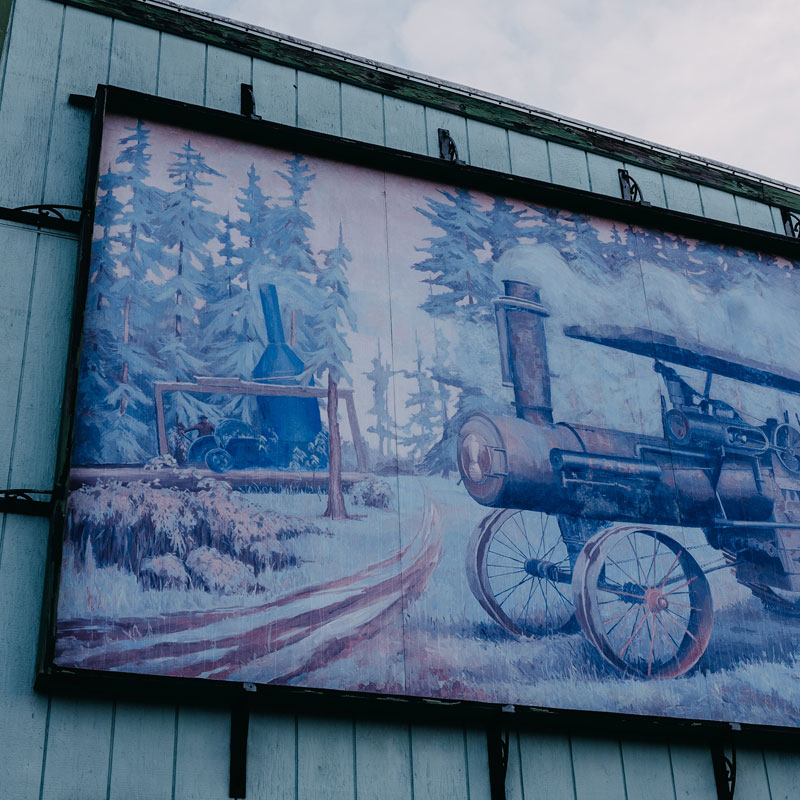 This mural, painted in 2015, is tucked into a tunnel and easy to miss. A professional snowboarder and internationally known artist, Jamie Lynn, created the vivid graffiti-style mural in the pedestrian passage way tunnel in downtown. Water is the theme behind this one where waves from the Elwha River to the sea appear to roll with you when walking through the tunnel. The waves are inspired by a now defunct surf spot after the Elwha River dam removal. The rest of the mural took shape from one of Lynn’s favorite views on the Lower Elwha Klallam tribe’s reservation. Lynn added tribal-inspired elements like an Orca whale and a Thunderbird to show his respect for the Native American history and culture. The mural was the idea of Strait Slice Pizza’s owner Scott Sullivan, who knew Lynn from his career as pro photographer in the surf and snowboarding industries. Sullivan also funded the mural project.

Get the full scoop about this mural here. 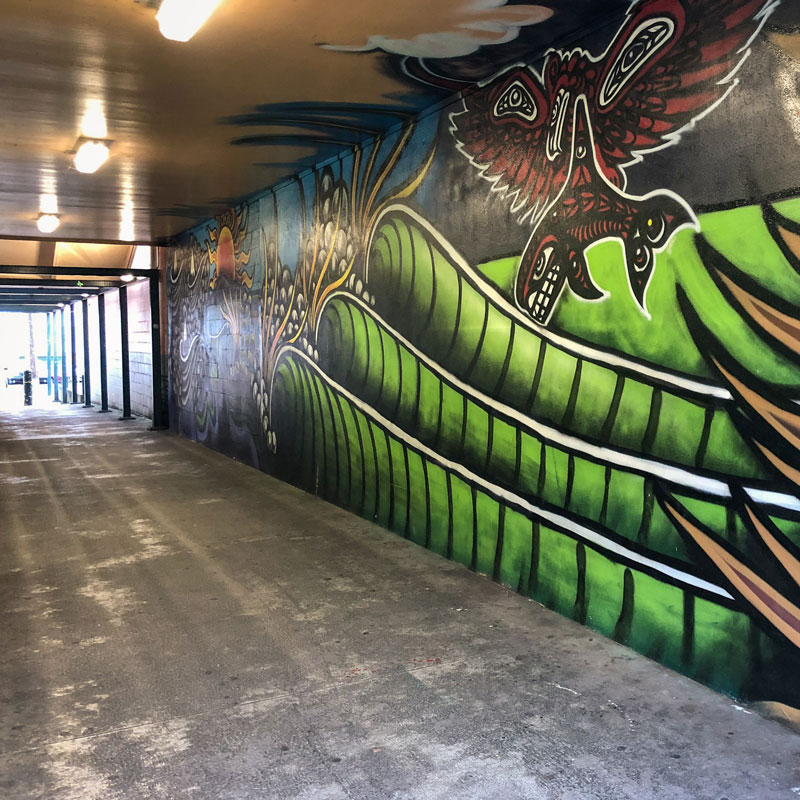 Painted on the back walls of Alley Cat Boutique, this mural brings the calmness and relaxation — and some of the animal inhabitants — of nearby Olympic National Park into downtown Port Angeles. 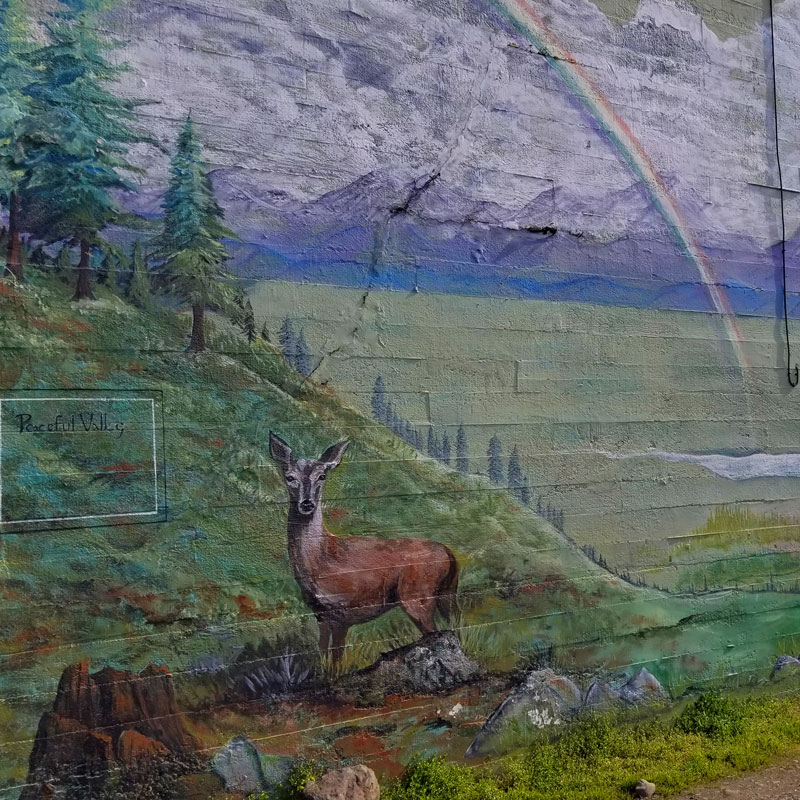 This colorful 30-foot-wide mural tells the tale of the origin of the name for the Elwha Klallam people as the “Strong People” or “Nəxʷsƛ̕áy̕əm”.

The artist Toma Villa, a registered member of the Yakima Nation and a former self-described graffiti tagger originally from Portland, Oregon, outlined the mural in 2015 and local school children from Port Angeles filled it in. To see the collaborative process in action, check out another similar mural project of Villa’s. The mural was spearheaded by Suzie Bennett, manager of the Elwha Kallam Heritage Center, and was funded 50-50 by the First Federal Foundation and the Lower Elwha Klallam tribe. For an extensive artifacts collection and rotating exhibits featuring Native American art from local tribes, visit the Carnegie Museum or Peninsula Community College’s Art in the Longhouse gallery.

Location: Inside The Gateway, Front and Lincoln streets. The Gateway serves as the public transit center for Port Angeles and is home to the popular Port Angeles Farmers Market 10 a.m. to 2 p.m. on Saturdays year-round. It can also be rented for events. 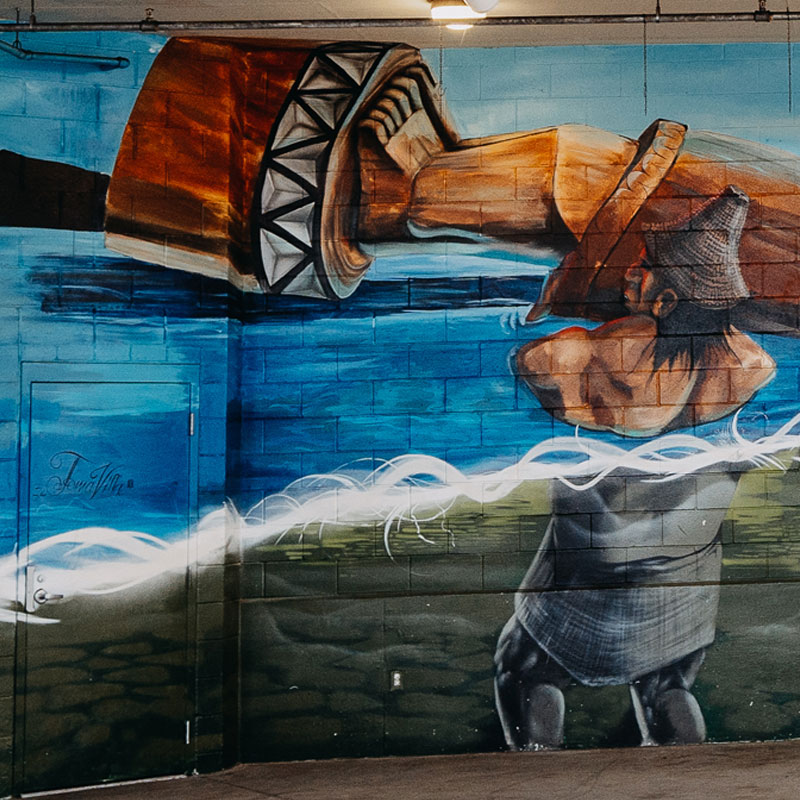 Though these aren’t on the official mural trail, these are still fun to look at and admire the artistry behind them. See if you can find more! 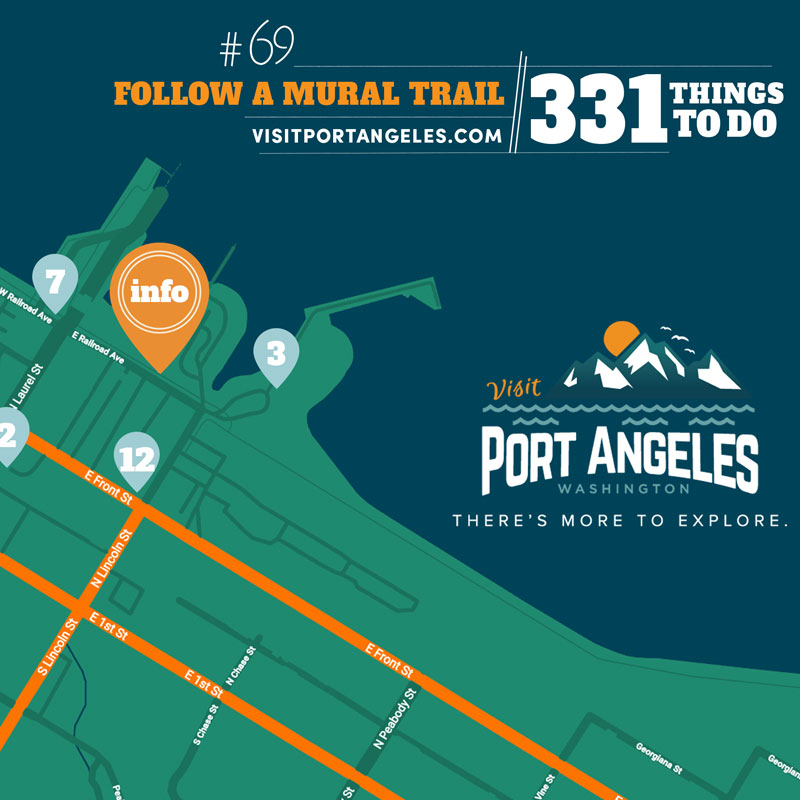